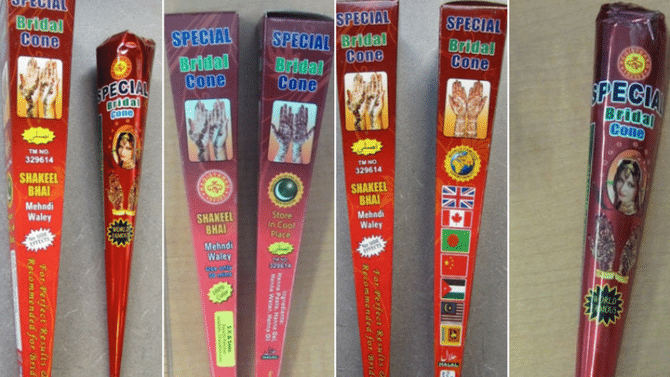 20,000 henna cones recalled in Canada after reports of chemical burns

Thousands of mehndi, or henna, cones are being recalled across Canada after reports of chemical burns.

About 20,022 Shakeel Bhai Mehndi Waley Bridal Special Henna Cone products were distributed by retailers across the country between June 2015 and May 2017.

The health agency highlights three Canadian importers of the product:

Health Canada adds that there may be other importers of the product around the country, which is manufactured in Pakistan by the company S.Y. & Sons.

The product was first recalled in April 2017, after it was discovered that the henna inside contains phenol, a skin sensitizer that can produce chemical burns. Phenol prohibited in Canada.

Health Canada said in a release this week that there have been two reports of burns related to the cones.

Consumers who have this product should stop using it immediately and throw it out.

Retailers have also been reminded by the health agency that it is illegal to sell cosmetics or other products that contain prohibited substances in Canada.